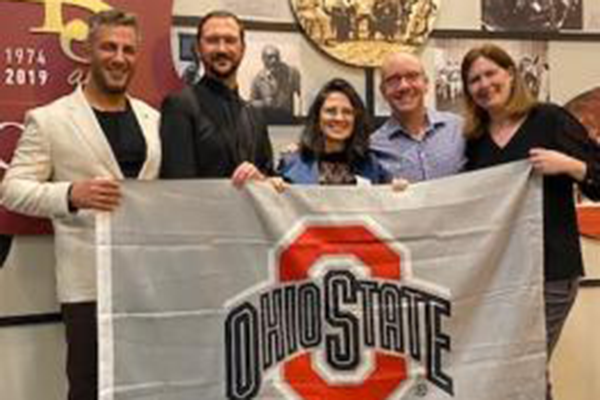 The School of Music and Center for Latin American Studies have created an academic artistic partnership that will span the next two academic years in an effort to strengthen ties between Ohio State and partner institutions in Brazil. In the first part of the 2022 exchange, CLAS and the School of Music hosted Fabio Cury (bassoon, University of São Paulo), Guilherme Pozzi (piano, University of São Paulo) and Giba Conceição (Afro-Brazilian percussionist, Salvador) for a week-long residency in October. Pictured, top right: Ohio State delegates in São Paulo. 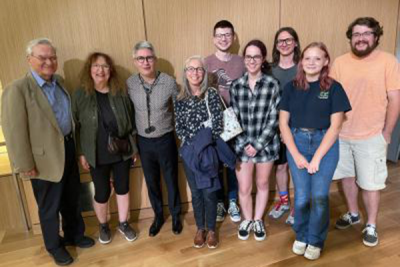 Cury with School of Music partners

During their time in Columbus, the guest scholars gave a solo recital, performed in the School of Music's annual Latin American Music Celebration Concert, and offered master classes and individual lessons.

Additionally, the guests served on a discussion panel at the Barnett Center for Integrated Arts and Enterprise which centered on the intersection of Brazilian art and politics. Engagement concerts in Hilliard Schools and Grove City High School wrapped up their time in Ohio. 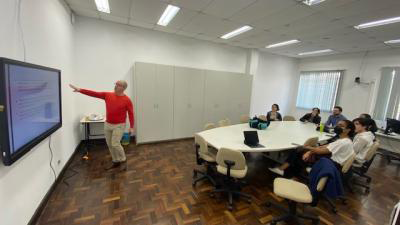 Hedgecoth moderates a discussion with Cury, Pozzi and Conceição

At the end of October, faculty from the School of Music — Susan Powell (professor, percussion), Michael Rene Torres (assistant professor of practice, saxophone and composition), Michael Ibrahim (director of the School of Music), and David Hedgecoth (associate director and chair of Undergraduate Studies) traveled to São Paulo, Brazil for a four-day residency at the University of São Paulo (USP) and the State University of São Paulo (UNESP). During this time, Professors Torres and Powell offered solo recitals and master classes on the USP campus.

For Powell, these activities were both professionally and personally impactful, and she expects the exchange will be a great asset not just to the School of Music but to the broader campus community:

The opportunity to travel to Brazil with colleagues, engaging in rich and inspiring discussions, was truly a highlight of my 20+ years at Ohio State. I'm excited to see the relationships continue to flourish as we further our exchange of ideas and create future musical collaborations for the benefit of the entire Ohio State community. 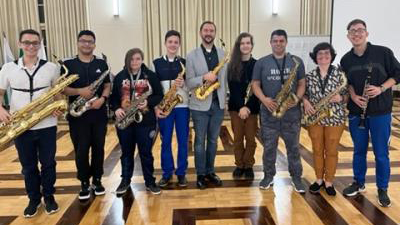 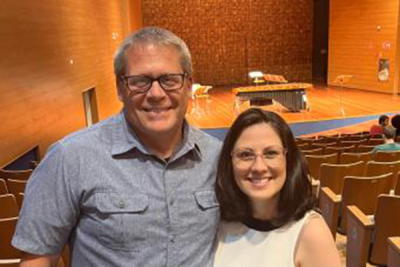 The group then traveled to Curitiba, Paraná in southern Brazil for a four-day residency at the Federal University of Paraná (UFPR) and the State University of Paraná (UNESPAR). The performance faculty performed a recital and gave master classes at the School of Fine Arts, and David Hedgecoth presented a lecture on problems and possibilities in American and Brazilian music higher education. The group also visited a local high school, met with a local music nonprofit, and toured potential concert venues for the musicians' next visit.

Hedgecoth enjoyed developing partnerships with Brazilian colleagues and expects these relationships will be fruitful:

The opportunity to share experiences and possibilities between our institutions has been very exciting. I look forward to the artistic discoveries that lie ahead. 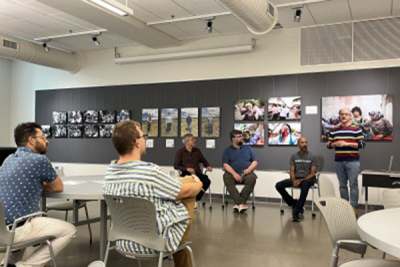 Hedgecoth engaging with students in Paraná

The Ohio State faculty also engaged in recruitment events for graduate students and met with their curricular counterparts to discuss the next phase of the partnership that will take place in February 2023.

Looking to the future, Schwenter describes the exchange as a productive first phase of an ongoing collaborative relationship, in which CLAS expects to play an active role:

The School of Music exchange with USP in São Paulo and UFPR in Curitiba was a great success, showcasing cross-cultural cooperation and connecting shared interests across both faculty and Brazilian undergraduate and graduate students. CLAS was very proud to sponsor the trip, as well as the prior visit of Brazilian scholars to Columbus, and we look forward to promoting further collaboration between Ohio State and these and other Brazilian universities!

— Contributed by the Center for Latin American Studies