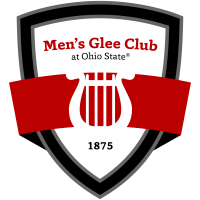 The Men's Glee Club at Ohio State is a diverse organization, attracting students from many academic disciplines. Each year we invite anyone who wishes to audition to come and try out for the oldest organization on campus. The Men's Glee Club is an official course, a School of Music ensemble and a campus student organization. Its leadership consists of faculty as well as the MGC Executive Board. The board structure is centered around the encouragement and inclusion of input — from the entire membership. Perhaps one day YOU will assume a leadership role in the MGC!

To add Men's Glee Club to your schedule, search for the course number using Student Center (buckeyelink.osu.edu). The course may be added without auditioning, but admission to the group depends on your successful audition. This ensemble is also a variable credit course (0.5–2.0) to allow you to participate without exceeding the 18 credit hour limit.  Please direct questions about variable credit to your academic counselor.

See our Performance Schedule. Find events that are open to the public at music.osu.edu/events.

Auditions for the "lighter fare" a cappella group, Statesmen, are held at the beginning of each school year. Details for Statesmen auditions are released in the first few weeks of Men's Glee Club rehearsal. Membership requires enrollment in Men's Glee, and also offers its own course enrollment.

The Men’s Glee Club at Ohio State was organized in 1875. It is the oldest of hundreds of student organizations available to students at the university. Today, as then, the group exemplifies the university’s dedication to tradition, excellence and diversity.