Enjoy the history of the Ohio State School of Music below. Also, read the Ruby Elzy Story. 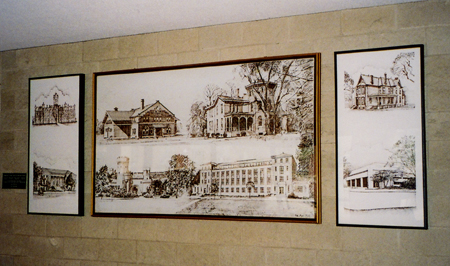 The triptych painting here displays the various meeting places for music classes (late 1800s to the present) on The Ohio State University campus. The painting was presented by Dr. Janet Ebert of the School of Music Society. The triptych hangs in the upper lobby of  Weigel Hall.

As can be seen above, music students have met in many places throughout the history of The Ohio State University.

As was common in the early days of higher education, one building sufficed for all activities. Old University Hall held offices, classrooms and dorm rooms. Central to college life, "U Hall" also was the location of the "Chapel" – an auditorium in which programs, plays and assemblies were held.

Tradition holds that budding musicians and ensembles of various kinds met in a space above the Chapel to rehearse. University Hall was the scene of cultural presentations through the 1950s, when Mershon Auditorium was erected. Interestingly, according to Tom Dale (BS '49), a student initiated group, Jazz Forum, had its beginning with "sessions" at U Hall in the 1940s. Jazz Forum was the precursor to today's Jazz Studies curriculum.

Among the first groups known to have graced the campus were the Men's Glee Club and the Mandolin and Guitar Club. In 1878 a drum corps was organized. The following spring a group considered to be the first campus band was brought together by Edward Horton, Jr., son of Ohio State's first president (for whom Orton Hall is named).

Although few photographs are available, one can imagine the violinists, songsters, piano and vocal students who must have graced that early stage at University Hall. Recitals were given there well into the 1940s, according to former Concert Band Director, Dr. Donald E. McGinnis (faculty 1941–1979). 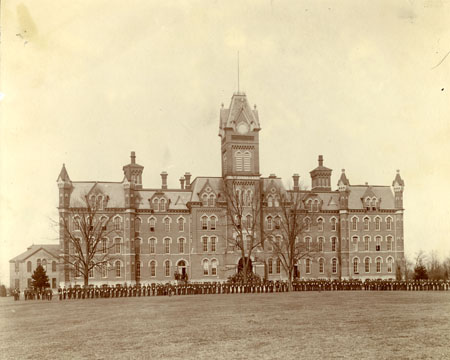 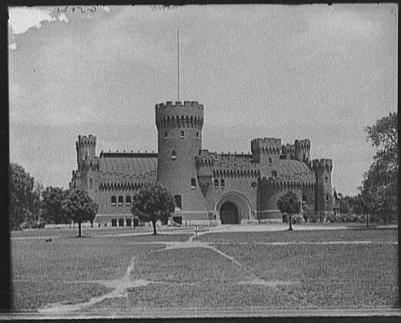 This photo from 1916 shows the Armory, located on the Oval curve on Fifteenth Avenue near the entrance to campus. Weigel Hall and the Wexner Center are now located on that land. The Armory, built in 1897, was once a center of campus activities; a gathering place for classes, ROTC drill, military band rehearsals, and a gymnasium.

The first music classes were held in the College of Education in 1908. The Department of Music was established in 1925. Page Hall, which was built in 1902 across the street from the Armory, housed the Music Library and offices for music faculty. Professor Weigel held forth in the basement. Richard Heine (BS '39, MA '50), legendary Ohio State grad and arranger, stated that he sorted "lots of music" in that basement. 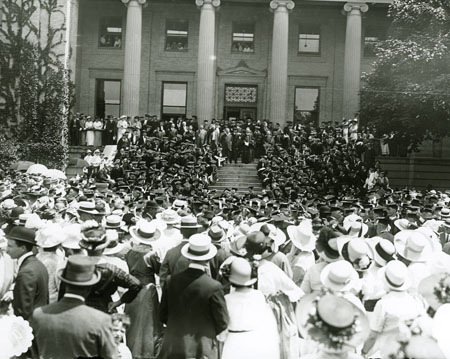 Page Hall evidently served as the commencement site, or an academic event in this 1916 photo. 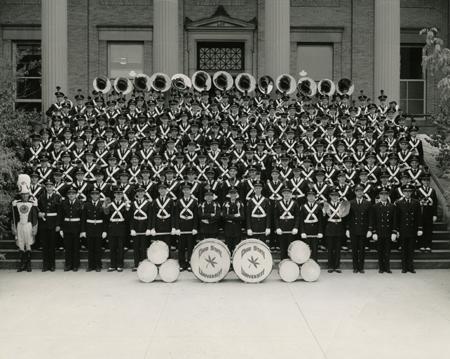 The Old Athletic House and the former President's House (fondly called the President's Residence) were turned over to the incipient Music Department for classes, rehearsals and practice areas. The Chairman of the Music Department, Royal D. Hughes (for whom Hughes Hall is named), had an office in the old President's House. Despite the fact that the upstairs had been condemned, music history classes were held above his office. Dr. A. Jeanette Sexton (BS '45, MA '52) (faculty '52–'84) recounts stories of M. Emmett Wilson (music history faculty) playing records for his classes, while ear training and music theory classes were trying to concentrate on their work. His music could be heard throughout the building. That building pre-dated the the founding of the University (1855).

Martha Leichty Mast (BS '33), a voice major, described Dr. Hughes as "one of the finest teachers" that she had ever had. Hughes was Chairman of the Department of Music from 1925 to 1938.

The Old Athletic House had an interesting history. The house was one of three faculty residences built by the University in 1882 and was located somewhere near the present site of Hagerty Hall. It was first occupied by Professor T. C. Mendenhall (for whom Mendenhall Lab – and the Mendenhall Glacier in Alaska – were named). In 1902 the house was moved to High Street (while continuing to be occupied by a faculty family!) near the President's House at the entrance to campus (at the north end of what is now Mershon Auditorium). The Athletic House housed coaches' offices and provided showers and locker rooms, presumably for athletes in competition on Ohio Field (near the present Arps Hall).

The Athletic House became the "Music Annex" (after the dedication of Ohio Stadium), and was the home of vocal and piano music. A single light bulb strung by a chord (sorry, cord) illuminated each room. Gifted theory teacher and pianist, Gertrude Kuehfuhs (faculty mid-'40s to mid-'80s), once related that she attempted to move the piano to the center of her classroom, so that she could see the music. Symphonic Choir Director, Louis Diercks, ascended the stairs two at a time, yelling out, "Don't move the piano — the floor will collapse."

A former stock barn and livestock judging arena (later poultry husbandry) was the home of the instrumental music area of the Music Department. The Judging Pavilion was renamed Rehearsal Hall, and it became rehearsal space for the orchestra, concert and marching bands, and ensembles. In addition to the large group rehearsal room, there were two teaching studios. Lockers were located in the basement, and instrumental practicing often took place between lockers. The "office" held stacks of music cubbyholes (made by Richard Heine) — mostly march-sized music. Another room held the marching band uniforms.

It may be of interest to note that the band uniforms were acquired in a most unusual way. All male students were required to participate in the ROTC program, and the marching band was a part of that program. Students rented their uniforms from shops along High Street. When the ROTC program changed from the dark blue to olive drab uniforms, the shops were left with huge inventories. Mr. Weigel charged up and down High Street, retrieving all of the left-over uniforms at little or no cost. Those uniforms — in all sizes — served the band through the 1950s. 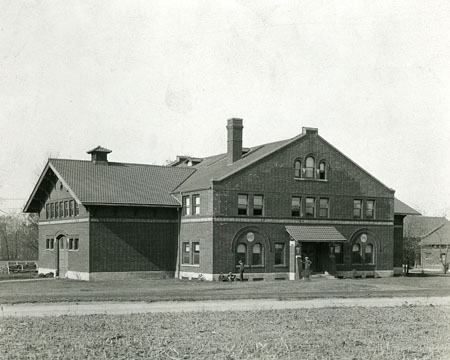 This must be a very early photo of the Judging Pavilion. In later years the front of the building was covered with ivy.

Classes may have been held in other buildings on campus. One story holds that following World War II, quonset huts — remaining on campus from wartime military classes — were utilized for music instruction.

Given the circumstances related above, one may wonder at the quality of music produced at The Ohio State University. An outstanding and inspirational faculty provided students with a superior musical education. Professional musicians, music educators, music directors, private music teachers, composers and arrangers and soloists emerged from those ancient classrooms - prepared to enhance and improve the musical life of the world.

A listing of those who graduated from The Ohio State University as music majors would show a predominance of persons who graced every aspect of the American music scene.

After the construction of Hughes Hall in 1949, the School of Music consolidated its various departments into one building. The single exception was Rehearsal Hall, which continued as the home of the Marching Band until the Stadium Band Room was built beneath the west stands of Ohio Stadium (c. 1973). The President's Residence, the Athletic House and, eventually, Rehearsal Hall fell to the wrecking ball. The Armory burned and was unusable.

Professor Weigel was the Department Chair after the death of Hughes in 1938. In 1945 Weigel's title became Director of the School of Music after the School's accreditation. He served in that capacity until 1959. He lobbied for a music building, and Hughes Hall finally was approved by the Ohio Legislature as a "Recitation Hall," but the specifications allowed some elements to be proscribed for music. These include lockers, instrument storage and practice rooms. On the blueprints, the auditorium is labeled "Music Lab." The music library was relocated to Hughes. Students and faculty settled in to make a great home for music study. The student body became so closely bonded, that the building was sometimes referred to as "Hughes High School."

No High School that! The students graduating from The Ohio State University School of Music since 1949 have been a credit to their predecessors, the faculty and the University. Music fields which could not have been envisioned in early years are filled with Ohio State SOM graduates, and classical music, music education and the popular music scene continue to be served by Ohio State musicians. Graduates continue to bring recognition to the University. Faculty members reach out to the community and young students. 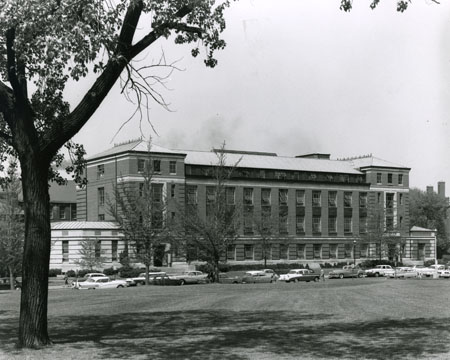 Within ten years of the opening of Hughes Hall, it became apparent that there was not room for the burgeoning classes. Many graduate students were shuttled to Lord Hall, and some ensembles met in the Stadium Band Room. Other classes met occasionally in other buildings. The music library moved to Sullivant Hall (the former home of the Ohio Archaeological and Historical Museum), and Hughes Hall rooms (even the wedge-shaped "organ pipe" room beside the auditorium) were utilized every hour for classes. The much-loved Student Lounge became a fond memory. 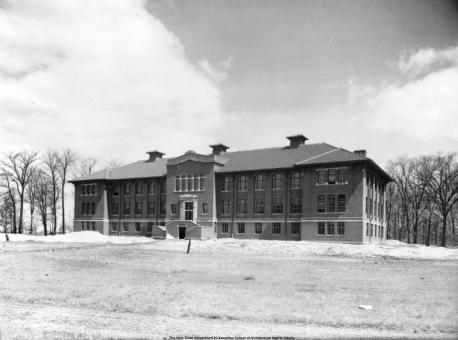 Lord Hall, a former Metallurgical Science and Ceramic Engineering Building, was used for many music classes prior to the construction of Weigel Hall. Lord Hall sat at an angle to most of the buildings in the Seventeenth Avenue area of campus. One explanation that has been given tells that the new Ohio Stadium, which was to replace Ohio Field, would require a walk going northwest at an angle. The building was built to accommodate that angle. The stadium (1922) was placed south of that area, leaving Lord Hall alone in its odd angle. Lord Hall was built in 1905.

After Mershon Auditorium was added to the campus entrance, it seemed logical to try to attach another music building to Mershon. Eventually Weigel Hall, named for Professor Eugene J. Weigel, was built. A larger auditorium was included, additional faculty studios were provided and utilitarian large ensemble rehearsal rooms were created. Again, the Ohio State School of Music continues in its dedication to provide a top quality music education to its students.

The new Steinbrenner Band Center, located on the east side of Ohio Stadium, has replaced the former Stadium Band Room. The Center is a state-of-the-art Marching Band facility.

Already, faculty and students in the School of Music have noted inadequacies of Hughes and Weigel Halls. A desire for new or redesigned facilities has been expressed. [Note: significant improvements were made to Hughes Hall during the summer of 2011.]