Are you a graduate of the Ohio State Flute Studio?

Contact Professor Jones to let us know where you are and what you are doing! Include your degree and year of graduation from Ohio State. 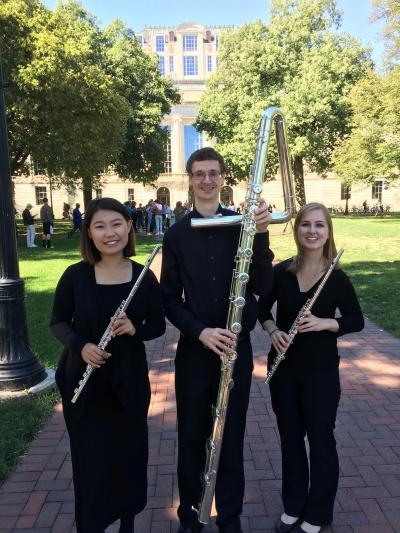 Professor Katherine Borst Jones conducted the OSU Flute Troupe in a showcase concert in August 2014 at the National Flute Association Convention in Chicago, Illinois. The Flute Troupe also performed on the Bruce Smith Music Showcase event. Among other pieces, the Flute Troupe performed alumnus Matthew Saunders' Nod á Don honoring Dr. Donald E. McGinnis and Diffusion and Light by alumnus Ladd McIntosh. Jones rehearsed and conducted the National High School Flute Choir, an honor choir made up of members from around the nation, including incoming freshman, Caleb Dilsavor, on a concert on August 10 at the NFA Convention in Chicago. The group performed three world premieres by composers Ladd McIntosh, Valerie Coleman (Juba) and Greg Lutz. At the convention Jones also conducted her NFA colleagues in the Mass for Flutes by Henry Brant on the concert honoring the 2014 Distinguished Service Award recipient, Patti Adams, as well as serving on the panel, "The Current State of Practicing."