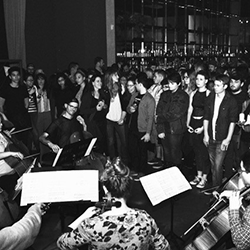 The idea for the event originated at the Wintergreen Summer Music Festival, where CELLOHIO executive director Clara Davison, a double major in Business/Fundraising and Arts Management, interned this past summer. "During the final performance of Brahms’ First Symphony, all of the fellows and I danced in the back of this gorgeous pavilion in the Blue Ridge Mountains,” Davison said. "As we were messing around, I realized that dancing to classical music would be a perfect event for CELLOHIO.” The mission of CELLOHIO – Ohio State’s cello ensemble – is to perform compelling works in dynamic spaces. About membership, Davison explained, "CELLOHIO is a student organization, including the entire cello studio and any non-major students who want to participate. Any Ohio State student or community cellist is invited to perform with us...we currently have 10–15 members in cello studio and about 10 non-majors."

While researching rave programs online, Davison stumbled across Classical Music Rave in Amsterdam. She reached out to current Classical Music Rave creative director, Brendan Jan Walsh. Born in the UK, raised in Belgium and based in the Netherlands, Brendan Jan Walsh works across the globe as a strategic consultant, speaker and cultural entrepreneur. His artistic alter ego, Mr Van Walsh, is an indie/classical DJ and cellist. Indie/classical is an emerging global movement of classically trained musicians who transcend arbitrary genre distinctions with inclusive innovation, as demonstrated by Classical Music Rave.

Classical Music Rave was founded in 2013 by a cohort of musicians. “We were a group of friends, who happened to be classical music lovers, frustrated with the rather stiff etiquette in concert halls,” explained Jan Walsh. “Most composers were rebels in their time, so why can’t we have fun with classical music and let people express themselves freely when listening to it?" Classical Music Rave combines the artistry of a symphony hall with the dynamic of a popular dance club in venues from Amsterdam to Sao Paolo.

The weirdest, most amazing night I’ve had in a while. – Janella V.
So many different types of people, and everyone was having fun together. – Diego A.
Huge breadth of people ranging from the classically inclined to the raging ravers. – Joseph E.

CELLOHIO is grateful to The Barnett Center for Integrated Arts and Enterprise and Puffin Foundation West, Ltd. for their generous support of our headlining artist, Mr Van Walsh. D’Addario and TRISM supported PARTY ARTY.