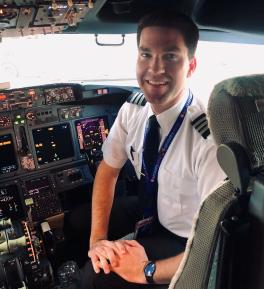 Joshua Fisher was a member of The Ohio State University Men’s Glee Club from 2010 to 2014, during which time he sang in the Bass II section and served as Section Leader. He was also a recipient of the J. Norman Staiger Memorial Scholarship. Josh graduated from Ohio State with a Bachelor of Science in Business Administration.

Josh has recently been hired by United Airlines as a First Officer flying the Boeing 757 and 767, where he will be flying routes ranging between the US, Europe, Hawaii and South America. He currently lives in St. Paul, Minnesota with his soon-to-be wife Jessica, who is also an airline pilot. Josh’s two greatest passions have been and always will be aviation and music!