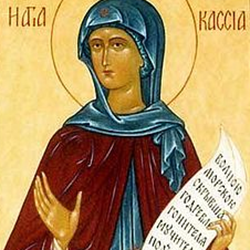 Born into a wealthy family associated with the imperial court in Constantinople, Kassia (810-ca. 867 CE) received a sophisticated education, including the study of classical Greek literature (the influence of which may be seen in her liturgical and secular poetry, epigrams and moral sayings), and was once considered as a possible bride for the Emperor Theophilos. She became the abbess of a monastery, and during the reigns of Theophilos (829–42) and his son Michael (842–67) wrote a number of liturgical compositions to contemporaneous texts, some of which may be settings of her own poems. More than 50 liturgical works have been attributed to her (although the authenticity of 26 is now disputed), the majority of them stichēra. A selection of these has been edited by Diane Touliatos-Miles under the title Kassia (b. 810): Thirteen Hymns (Bryn Mawr, PA: Hildegard Publishing Co., 2000).

Diane Touliatos-Miles is a musicologist who specializes in Eastern medieval Chant, ancient Greek music, and women composers. A 1979 graduate of The Ohio State University, with M.A. and Ph.D. degrees in Musicology, she recently retired from the University of Missouri, Saint-Louis, where she was Professor of Music, University of Missouri Curators’ Professor, and Director of UMSL’s Center for the Humanities. Her work has been supported by Fulbright-Hayes, American Council of Learned Societies, and National Endowment for the Humanities research grants. She has published five books and over sixty articles. Among the most recent are her monumental Descriptive Catalogue of the Musical Manuscripts of the National Library of Greece: Byzantine Chant and Other Music Repertory Recovered (Farnham, England: Ashgate Ltd., 2010), Women in the Arts: Eccentric Essays in Music, Visual Arts, and Literature (co-edited with Barbara Harbach) (Cambridge, England: Cambridge Scholars Press, 2010), and HER ART: Greek Women in the Arts from Antiquity to Modernity (Frankfurt and Berlin: Paul Lang Verlag, 2011). Touliatos’ published transcriptions of the music of Kassia were recently recorded by VocaMe with the CD title, Kassia: Byzantine Hymns of the First Female Composer (c. 810-843/867) under the Christophorus Record Label of MusiContact in Heidelberg, Germany (see www.christophorus-records).

Campus visitors, please use either the Lane Ave. Garage or the Ohio Union South Garage. All other garages in the vicinity of the 18th Ave. Library are closed to visitors before 4 p.m.