Home » Events » Lectures in Musicology: Screening of film, "While We Live" (Dani Kouyate)

Lectures in Musicology: Screening of film, "While We Live" (Dani Kouyate) 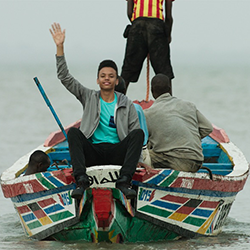 Co-sponsored by the School of Music, African American and African Studies, French and Italian, Germanic Languages and Literatures, the Global Mobility Project, the Office of International Affairs, Ethnomusicology Program.

This event is FREE and open to the public.

About the film: "While We Live" tells the story of a Gambian woman who, after living in Sweden for 30 years, decides to move back to her home country with her son, a promising hip hop artist. However, Gambia has changed a lot over the years and the move causes the pair to question their sense of identity and home.

About the director: Dani Kouyaté is director of film and theater, writer, actor, storyteller and musician, whose work spans three decades and deals broadly with questions of culture, society and identity at the interstices of Africa and Europe, tradition and modernity, past, present and future. Kouyaté was recently awarded the “Best Film by an African Abroad” prize at the 2017 African Movie Academy Awards Ceremony in Lagos, Nigeria for his 2016 film Medan Vi Lever ("While We Live").

Lectures are held Mondays at 4 p.m. in the 18th Avenue Library, 175 W. 18th Ave. (Music/Dance Library, second floor, room 205), with the exception of the September 26 event held at the Wexner Center for the Arts. These events are free and open to the public.