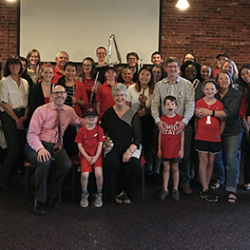 The Ohio State University Flute Troupe, under the direction of Katherine Borst Jones, attended the 45th National Flute Association Conference in Minneapolis, MN in August. The trip was made possible through a grant from the Office of Outreach and Engagement, a contribution from alumna Belva Hahn, and generous contributions to the Flute Troupe’s Buckeye Funder campaign which raised over $5,000.

The ensemble performed in two conference concerts. For the Healing and Remembrance Concert (performers pictured below right) they presented Ave Maria by Carrillo in memory of flute alumnae Laura Bockbrader (BME 1992) and Rebecca Smith Owens (MA 2009). The troupe was also featured on a Flute Choir Showcase program performing pieces by alumni Roger Cichy, Zach Koors and Jacob Reed in addition to pieces by Thomas Duffy and Valerie Coleman. Both performances were enthusiastically received with numerous comments and compliments from attendees. 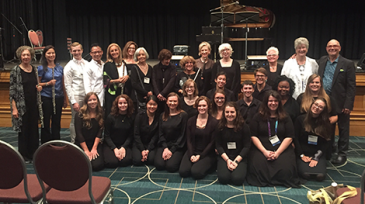 In Minneapolis, the students had the opportunity to attend sessions and concerts that allowed them to further their knowledge of music and gain career insights. Students were able to meet and network with other musicians as well as hear incredible flutists such as Jim Walker, Carol Wincenc, Ian Clarke, Stefan Hoskuldsson, Greg Patillo and Robert Dick.

In addition, the troupe performed for the OSU Alumni Club of Minnesota at a special event in Bloomington, MN (pictured above left). The students enjoyed the opportunity to spend time with these alumni and hear stories about their time at Ohio State. The club members were tremendously gracious, enjoying the troupe’s famous performance of "Hang on Sloopy"—and became nostalgic upon hearing their flute rendition of Carmen Ohio. 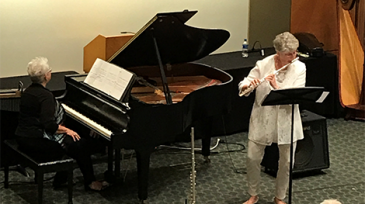 Additional convention highlights were two performances by Professor Katherine Borst Jones. She performed the world premiere of Blinded by (the) Light for flute and piano with electric guitar and wind chimes by internationally-renowned composer, Libby Larsen. The performance (pictured at left) was the closing piece on the program Libby Larsen: A Minnesota Original. Jones also performed Town Lights for two flutes and piano by Yuko Uebayashi with flutist Carol Wincenc and pianist Dianne Frazer on the Healing and Remembrance Concert in memory of Ohio State alumna, Kay Wolford Hardesty Logan and Professor Emeritus, Dr. Donald E. McGinnis.

Jones also served as moderator for two panels—Today’s Studio Teacher: A Roundtable Discussion with colleagues from the Universities of Alabama, Minnesota and Oregon; and Musician’s Guide to Developing Social Skills: Maximize Interactions with Conductors, Colleagues and Contractors, with principals of the Chicago and Los Angeles Orchestras and members of the Detroit Symphony. She also presented a master class, Open 30+MasterClass for flutists 30 and older.

Ohio State flute students and alumni made significant contributions to the 2017 convention and remain active in many roles for the National Flute Association, an international organization of over five thousand flutists.

Daniel Gallagher, second-year DMA and graduate teaching associate, was a semifinalist and Chelsea Tanner (BM 2013) was a quarter-finalist in the NFA Young Artist Competition.