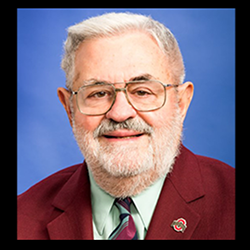 Tony Pasquarello has been playing the piano for 80 years. Since his dad was a violin teacher in South Philly, a grand piano was in Tony’s home before he was. But he always hated practicing, even though, in his early teens, he achieved moderate success with some classical repertoire—while coming to realize how impossibly difficult that repertoire can be.

A philosophy honors graduate and winner of the Departmental Award at the University of Pennsylvania, Tony received all the teaching assistantships for which he applied, and accepted Ohio State’s offer in 1955. At about the same time he began developing a piano style that would eventually lead to his being regarded as one of Ohio’s premier pop/jazz pianists. When the Mansfield Campus opened in 1966, he became its original philosophy professor, and taught there until his 1986 retirement.

Tony continues to perform as a pianist—“less and less,” he quips. “The changes in pop music have been severe, even traumatic.” He is especially proud of having given the unique concert celebrating the 50th anniversary of The Ohio State University at Mansfield. He has frequently traveled abroad and given dozens of his signature, pops lecture-concerts.

Shortly after retiring, he caught the Keno bug and has participated in 90 Keno tournaments in downtown Vegas. Early European stamps, gardening and much else occupy his time, yet he has also published some 35 extended articles exploring and defending secular humanism, and a humorous, quasi-autobiographical book, The Altar Boy Chronicles.

Tony’s son Joe, a violinist, and daughter Laura, a cellist, were both notable student musicians and Ohio State graduates. Joe was a National Merit Scholar on full scholarship at The Ohio State University and the youngest person ever accepted as a regular member of the Columbus Symphony.

About 10 years ago, Tony decided to memorialize his son’s tragic 1987 death by creating The Brahms Fund, with cash gifts and charitable gift annuities totaling $125,000. The Fund makes possible a number of small cash grants to assist Buckeye music students, as well as a major, annual Brahms Award for special achievement with respect to music of the Romantic-Modern period, roughly 1830–1960. That encompasses not only Brahms, but Chopin, Grieg, Ravel, Gershwin, Bernstein and scores of other, familiar composers writing in music’s most passionate, lyrical era.

Tony became a Brahms fan about 75 years ago when he first heard Horowitz play the 2nd Piano Concerto. “Brahms immediately spoke to me; something like James Earl Jones announcing that you’ve won the lottery.”  His hope is that the Brahms Fund will play a small, but significant role in keeping this glorious music alive for all future generations. Or, as the lyrics sing, “… with any luck (and some funding), then I suppose the music never ends.”