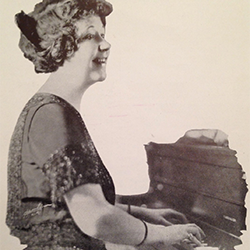 The William A. Hammond Lecture on the American Tradition

Guest artist/lecturers Marian Wilson Kimber and Natalie Landowski present a lecture recital, "In a Woman’s Voice: Musical Readings by Women Composers." This lecture, funded by the College, is sponsored by The William A. Hammond Lecture on the American Tradition.

The recitation of poetry or monologues, or “elocution”—often accompanied by music—was a common public entertainment in the United States during the Progressive era. Women’s clubs served as the primary audiences for “musical readings,” which expressed views of courtship, marriage, domestic life, children and aging. Women composed most of the music for these performances. This lecture recital introduces the elocutionist’s art and features performances of music by Chicagoan Phyllis Fergus (1887–1964), Frieda Peycke (1884–1964) of Los Angeles, and others. Similar in style to popular songs, musical readings are notable for their comic tone and satire of gender expectations, sometimes created through humorous quotations of well-known compositions and closing gestures that punctuate the narratives’ climactic “punch lines.” By making music to accompany comedic female voices, composers “feminized” melodrama, creating works that appealed specifically to women while subtly resisting contemporary gender norms.

Marian Wilson Kimber, professor of musicology at the University of Iowa, writes about the composers Felix Mendelssohn and Fanny Mendelssohn Hensel, and the role of spoken-word performance in American concert life. She was the keynote speaker at Seoul University for the 200th anniversary of Mendelssohn’s birth in 2009 and gave the Master Teacher Lecture for the American Musicological Society in 2011. Her book, The Elocutionists: Women, Music, and the Spoken Word (University of Illinois Press, 2017), was the recipient of subventions from the Society for American Music and the American Musicological Society. Assisted by Natalie Landowski, Wilson Kimber has performed the compositions she explores in her book at the 2018 Society for American Music meeting in Kansas City, the 120th anniversary of the National League of American Pen Women in Washington, DC, and last year’s biennial meeting in Des Moines.

Natalie Landowski is on the faculty of Grand View University in Des Moines, Iowa. She holds the BM (University of California—Irvine), MM (University of Illinois—Champaign–Urbana) and DMA (University of Iowa) degrees. At Iowa, she studied piano with Ksenia Nosikova and piano pedagogy with Alan Huckleberry. Landowski has performed in master classes by Gary Graffman, Menahem Pressler and Kenneth Drake, and was a finalist in the 2008 and 2015 International Schlern Piano Competitions. Landowski was president of Illinois’ MTNA Collegiate Chapter and recipient of the Illinois Center of Teaching Excellence’s Certificate. She taught a full piano studio at West Music in Coralville, IA for four years; her students placed in and won Iowa Music Teachers’ Association district and state auditions. Landowski has presented lecture recitals, pedagogy workshops and master classes in Georgia, Nevada, Oregon, California and Illinois.