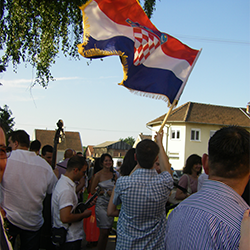 When flags and music represent a nation jointly, ethnomusicologists typically see these media's symbolic roles as more semiotically anchored and limited in the case of visual emblems than in song, in which they rightfully recognize an ontological flexibility through its temporality, orality and participatory processuality (Bohlman; Muller; Turino). Yet such conclusions also imply both forms' stability as symbols for interpretation and their discreteness from other sensory phenomena, conditions unlikely to hold in all nationalist contexts. Based upon extensive fieldwork with tambura chordophone bands at Croatian weddings, this presentation examines the musical procession of the national banner in wedding convoys' lead cars as an instructive confluence of forms that lifts flags out of their static, two-dimensional lives as images into chaotic scenes obscured by automobiles, flares and smoke; patriotic tambura songs blasted by car speakers and live musicians similarly merge with horns and screeching tires, contributing significantly to the ritual's affective power while relinquishing some of their sonic and semiotic primacy. MacMillen argues that the flag's procession facilitates an affective non-memorial of the violent sounds and visual fields of Croatia's war of secession, a rendering of past perceptual intensities that in its invoking of traditional forms of music and ceremonial magic is more about becoming than remembering. Convoy cars in these contexts become ideal chambers within/from which to hear music's fragile yet potentially assaulting claim on urban space, which, while facilitating the Catholic wedding rite's creation and defense of the Croatian (national) family, violates anew their compatriots' sonic and visual peace.

Ian MacMillen directs the Oberlin Center for Russian, East European & Central Asian Studies at Oberlin College & Conservatory. He teaches in the affiliated Russian & East European Studies program, offering courses that partner with local Roma-Gypsy, Macedonian, and Rusyn musicians. He holds a PhD in Anthropology of Music from the University of Pennsylvania and has published on South Slavic and Romani tambura music, fascination in Bulgarian traditional music, music tourism and transnationalism, music and noise in South Slavic wedding rituals, and the use of jazz in Soviet film. His book, Playing It Dangerously, is scheduled to be published by Wesleyan University Press in autumn 2019.