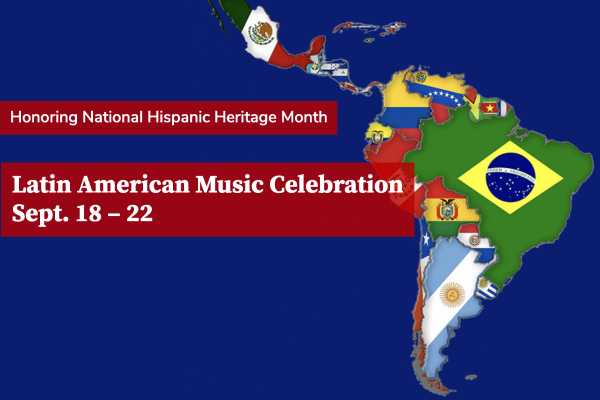 Access the digital Recital program before, during or after the concert. No paper programs will be distributed.

Co-sponsored by the Center for Latin American Studies.

The celebration will continue with the Latin American Music Celebration Concert on Thursday, Sept. 22. 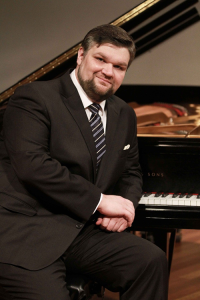 Luiz Guilherme Pozzi, piano, graduated from the State School of Music and Fine Arts in Curitiba, Brazil, where he was taught by the Russian pianist Olga Kiun. Soon after, he took his Diplom–Musiker at the Superior School for Music from Freiburg, Germany, under the supervision of Felix Gottlieb. In Austria, Pozzi finished his post-graduate studies with honors under Alexander Satz. The pianist holds a master’s degree in music performance from the State University of Campinas (UNICAMP) and a DMA at the University of São Paulo (USP). Recently Pozzi finished his post-doctoral research project on Beethoven Tempo Flexibility, also at the University of São Paulo. His debut CD, recorded live with sonatas of Brahms and Liszt won the 26th Brazilian Music Award — the most important recording prize in Brazil. Luiz Guilherme Pozzi teaches piano and chamber music at the São Paulo State School of Music, holds the piano professor chair at the Santa Marcelina faculty, and teaches piano and chamber music at the University of São Paulo (USP). His pupils have collectively won more than a hundred prizes and distinctions in national and international music contests.

After graduating from UNICAMP under the guidance of Professor Paulo Justi, Fábio Cury, bassoon, joined the solo performance class of Prof. Klaus Thunemann at Hannover Musikhochschule. With a Master in Arts from UNICAMP and PhD in Music from USP, he has served as bassoon professor at São Paulo University since 2002. Cury acted as the principal bassoonist at the São Paulo Symphony Orchestra and São Paulo Opera, in addition to being one of the founding members of Camerata Aberta, with which he received the APCA and Bravo awards.

Within his extensive phonographic production, one can find an eclectic repertory, ranging from Bach’s works on the baroque bassoon to contemporary music with Camerata Aberta. He recorded works by Brazilian composers such as Mignone, Villa-Lobos, Guarnieri, Claudio Santoro, André Mehmari, Antônio Ribeiro and Alexandre Lunsqui, among others. His album Velhas e novas cirandas: Brazilian music for bassoon and orchestra was awarded APCA Prize for best CD in 2010

Born in Bahia with a talent for music, Giba has developed his rhythmic creativity since adolescence. Considered today among the great drummers of Brazil, Giba began his professional career in 1986 and received the prestigious Caymmi Award as a musician in 1987. His work is rooted in the deep mysticism of Candomblé — a religious African tradition in Brazil. The instrument that he researches the most and in which he exhibits greater technical mastery is the cuíca, a large pitch range drum played with friction.

Giba has traveled extensively throughout Europe and the USA with renowned Afro-Brazilian singer Margareth Menezes. He has played and recorded with numerous talented Brazilian artists including Gilberto Gil, Zezé Mota, Paulinho da Viola, Paulo Moura, Armandinho, Elza Soares, Sarah Spelsberg, Jimmy Cliff, Stanley (Star Light) and the WIU Jazz Studio Orchestra. During his formative years, Giba helped and founded Samba groups such as Sexta Samba Sound, Samba Fama, and played with instrumental bands such as Pulsa Group, Auto Reverse and Ilú Batá, as well as with several carnival bands. In 2001, he participated in a major research project called "Odantalan." The project accessed the Afro-diasporic cultural and spiritual heritage by uniting great musicians from Africa and the diaspora in Luanda, Angola. In 2012, he joined the Music Education Project at Western Illinois University.

The Center for Latin American Studies and the School of Music have entered into a partnership for a series of academic exchange events in 2022 and 2024. In 2022 Ohio State will host three artist scholars from Brazil (bassoon, piano, Afro-Brazilian percussion) who will offer master classes and a recital, as well as perform in the Latin American Music Celebration Concert. They will also have engagements with the Department of Spanish and Portuguese, and will visit local schools.

In October, Susan Powell, percussion; Michael Torres, saxophone; David Hedgecoth, music education; and School of Music Director Michael Ibrahim will travel to São Paulo, Brazil for a four-day residency at Universidade Estadual de São Paulo (USP). This portion of the trip is in coordination with the Ohio State Brazilian Gateway Office. The group will then continue on to Curitiba, Paraná for a four-day residency with Universidade Federal do Paraná (UFPR), in partnership with the Sister Cities International Program. Columbus and Curitiba are sister cities; Ohio and Paraná are sister states.