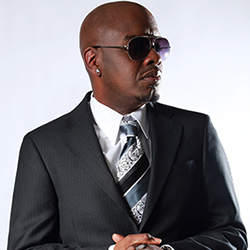 The Ohio Show Band is a new and exciting commercial music ensemble that produces tour quality shows. Formed in 2016, the ensemble is led by Shawn Wallace, Jazz Studies area head. This past fall, the group was honored with an invitation to present a pre-concert performance outside the Schottenstein Center, prior to the Bruno Mars concert.

The second half of tonight’s concert will feature Quan Howell, a Columbus artist who has sung with the Columbus Jazz Orchestra, Resurrection Mass Choir, Sounds of Blackness, Rod Stewart, Johnny Gill, New Edition, Salt‘n’Pepa, Kirk Franklin, and many others. Howell and the OSB will present a Motown revue, showcasing some of the America's favorite songs by Stevie Wonder, The Temptations, Marvin Gaye, the Jackson 5 and more.