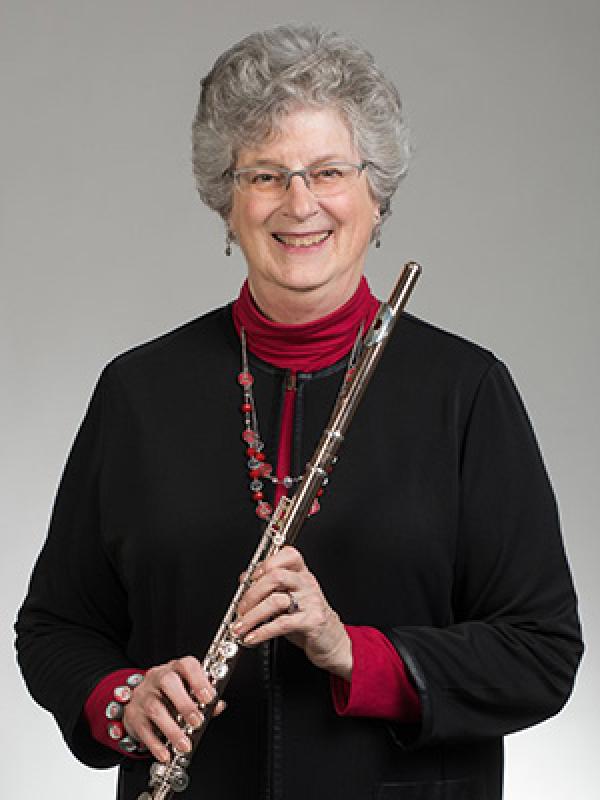 Professor of Flute and Area Head of Orchestral Instruments

Katherine Borst Jones, professor of flute at The Ohio State University since 1985, has served as chair of woodwinds, brass and percussion since 1999 and of orchestral instruments since 2010. She was the recipient of the School of Music Distinguished Teacher award in 1995 and 2012, and the Distinguished Scholar Award in 2008. She was a founding member and co-principal flutist of the ProMusica Chamber Orchestra (Miriam and Bernard Yenkin chair) from 1979–2019, and a member of the Columbus Symphony Orchestra from 1976–2019. She is a founding member of the flute/viola/harp trio COSMOS, which has performed at the flute, viola and harp association conventions, and the Jones/Norton Duo with harpist Jeanne Norton. Ms. Jones was and continues as principal flute of the New Sousa Band, which performed at the 2009 WASBE and Mid-West Band and Orchestra clinics and has toured Japan, China and the United States extensively. She received the Lifetime Achievement Award from the Chicago Flute Club in November 2019 and was inducted into the Beach Hall of Distinction at Emporia State University in September 2019.

Created in 1976 by Ms. Jones, the annual Flute Workshop for high school students draws students nationally to the Columbus campus. Ms. Jones conducts the OSU Flute Troupe, a flute choir that has performed at six national (NFA) and four state (OMEA) conventions and has recorded for McGinty Music (mcgintymusic.com). In 2014 the flute choir music series, the KBJ Collection was launched with ALRY music. She has conducted flute choirs throughout the United States including the Alla Breve Flute Choir in Arizona and the NFA Collegiate Flute Choir (2000) and the National High School Flute Choir (1997, 2014). The OSU Flute Troupe's 2015 video of "Hang on Sloopy" received thousands of hits on YouTube. In 2019 the Flute Troupe and alumni were featured with the Ohio State Marching Band performing Sousa's "Stars and Stripes Forever" for the halftime show, "A Giant Leap" at Ohio Stadium.

Professor Jones has served in many roles for the National Flute Association - as president twice, vice-president, 1992 Los Angeles convention program chair and as chair of development. She has performed as a soloist and chamber musician at numerous conventions, and was a member of the NFA delegation to the Soviet Union in 1989. She received the NFA Distinguished Service Award in 2011. In addition, she serves as an advisor for the student-run Central Ohio Flute Association which has presented a spring Flute Festival for over thirty years.

A chamber music enthusiast, Professor Jones was elected president of Chamber Music Columbus in 2016. She had previously served as a trustee on the education and outreach and program committees.

In addition, she is a visiting professor at the Shenyang Conservatory of Music in Shenyang, China where she has performed and given master classes at two international flute festivals. She performed at the 2012 British Flute Society International Convention in Manchester, England. She was co-founder, teacher and coordinator for the Robert Willoughby Master Classes at the University of New Hampshire for eight years. She has taught at Heidelberg College, Denison University, Emporia State University in Kansas, Oberlin Conservatory, Capital University, and at the American Institute for Musical Studies in Graz, Austria.

Born and raised in New Jersey, Ms. Jones studied with Keith Brion, Robert Willoughby, Kyril Magg, Donald E. McGinnis, and Julius Baker. Her degrees are from the University of New Hampshire (BA) and The Ohio State University (MM). She also attended the Congregation of the Arts Program at Dartmouth College; the Oberlin Baroque Performance Institute; the Boxwood program in Nova Scotia; and the Savvy Musician Academy, where her team won the Audience Choice Award as well as second place for their project in the Venture Challenge. She has performed with symphonies, chamber groups and festivals around the world including the Columbus Bach Ensemble, American Chamber Winds and the American Wind Symphony. She is a frequent guest artist and clinician across the country and has recorded for CRI, d'Note and Summit recordings, including a flute and harp compact disc Paradise, with harpist Jeanne Norton. A recording of COSMOS commissions was released in 2017 to rave reviews. In addition, Ms. Jones, a consulting editor for Flute Talk Magazine, has published articles in Flute Talk and the OMEA Triad, among others. She has been guest artist for master classes, flute festivals and clinics across the country.