Reprise Lectures in Music: "Music and the Digital Humanities" 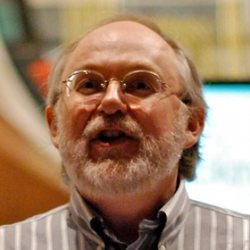 David Huron, professor at the Ohio State School of Music, presents "Music and the Digital Humanities," the ninth of ten Reprise Lectures in Music, Wednesdays from 11:30 a.m. to 12:25 p.m. on Ohio State's main campus. These lectures are FREE and open to the public.

David Huron is Arts and Humanities Distinguished Professor in the School of Music at The Ohio State University and is also affiliated with the Ohio State Center for Cognitive and Brain Sciences. Huron is best known for his research in music perception, cognition and emotion. Over the course of his career, he has produced 170 scholarly publications including several books, and has given over 400 lectures and presentations in 25 countries, including 28 keynote conference addresses. Dr. Huron has been the Ernest Bloch Visiting Lecturer at the University of California–Berkeley, the Donald Wort Lecturer at the University of Cambridge and the Astor Lecturer at Oxford. In 2002 he received the Outstanding Publication Award from the Society for Music Theory, and in 2007 he received the Wallace Berry Book Award. In 2017 he received the Society for Music Perception and Cognition's Lifetime Achievement Award.

Professor Huron will present the final lecture of the Reprise series, "Issues in Musicology: Problems and Prospects," on Wednesday, April 10.