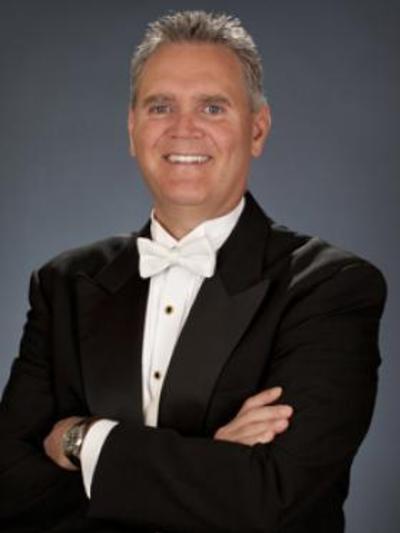 Professor and Area Head of Conducting and Ensembles; Director of Bands

Russel C. Mikkelson was appointed in 1998 as the sixth director of University Bands at The Ohio State University, where he serves as professor of music (conducting) and area head of Conducting and Ensembles, conducts the Wind Symphony, leads the graduate wind conducting program and oversees all aspects of the university's band program. Under his direction, the Ohio State Wind Symphony has performed twice at the College Band Directors National Association Convention, the American Bandmasters Association Convention, the CBDNA North Central Conference, at the Ohio Music Educators Association Professional Development Conference seven times, and has recorded six CDs (see Recordings): Network (Naxos), Rest (Naxos), Southern Harmony (Naxos), Winds of Nagual (Naxos), Jubilare! (Mark Records) and Sounds, Shapes and Symbols (Mark Records). In a review of the Southern Harmony recording, Fanfare magazine proclaims, "The Ohio State musicians play their collective hearts out and conductor Mikkelson shapes the music with a loving hand, wringing every last drop of emotion out of the music. If this does not give you goose-bumps, nothing will."

Dr. Mikkelson is past president of the North Central Division of the College Band Directors National Association (CBDNA) and of the Big Ten Band Directors Association; is a member of the World Association of Symphonic Bands and Ensembles (WASBE), NAfME, Phi Mu Alpha Sinfonia, Phi Beta Mu; and is a duly elected member of the American Bandmasters Association. An enthusiastic advocate of public school music education, Dr. Mikkelson has conducted All-State Bands, Festivals, and Honor Bands across the United States and internationally. The 2021–2022 academic year sees him conducting the All-State Bands of New York and Colorado. Additionally, he serves as music director and conductor of the professional Newark-Granville Symphony Orchestra, as well as the Heisey Wind Ensemble, a highly skilled community band.

He is the recipient of both The Ohio State University School of Music Distinguished Teaching Award and the Distinguished Scholar Award, in addition to serving on the editorial board of the Journal of Band Research. He has published articles in The Instrumentalist and The Journal of the Conductor’s Guild; as a composer/arranger, he is published through C. Alan and Daehn Publications. Previous posts include the State University of New York at Fredonia, Stevens Point Area Senior High School (WI) and Kickapoo High School (WI). He was recently honored with the University of Wisconsin–Eau Claire's President's Alumni Award, recognizing outstanding professional and personal achievement.