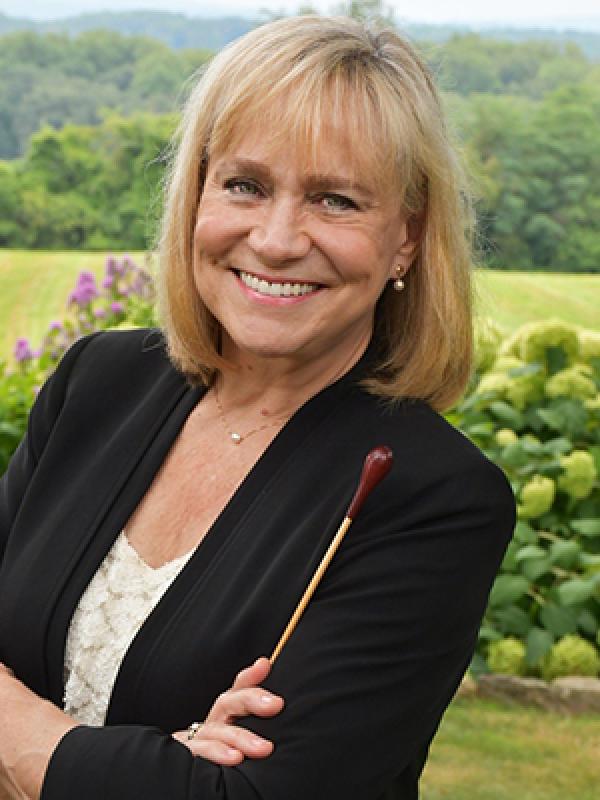 Miriam Burns was on staff with the New York Philharmonic as one of their cover conductors from 1999–2007, having been appointed by Kurt Masur as a result of a competitive audition by-invitation-only. In this capacity, she accompanied the orchestra on tour to the Far East as the tour assistant conductor to then new music director, Lorin Maazel, and for eight years was entrusted as an assistant conductor on call for countless specific, fully prepared programs under many guest conductors of international repute.

Other prior music directorships include the Tallahassee Symphony, where she was designated a Paul Harris Fellow for six years of outstanding contribution to the cultural life of Tallahassee, the Kenosha Symphony and the Lawton Philharmonic. Ms. Burns recently served as principal conductor and music advisor for the popular multimedia orchestral show RePLAY: Symphony of Heroes, based on the symphonic music of videogames. As such, she conducted the world premiere with the Sydney Symphony at the Sydney Opera House in Australia, followed by performances with the Houston Symphony, Phoenix Symphony, Oregon Symphony, Grand Rapids Symphony, members of the Toronto Symphony at the Sony Centre, and others.

Ms. Burns debuted as guest conductor with the Rochester Philharmonic in 2018 and was re-engaged for another performance at the end of the season. International engagements have included two recent performances with the Magdeburg Philharmonic (Germany), preceded by debuts with the Bournemouth Symphony (England); at the Stadthalle (Wuppertal, Germany); the First Ladies Symphony Orchestra of Poland, and the YinQi Symphony Orchestra (Taiwan). Highlights of prior guest conducting within the US include appearances with orchestras such as the Memphis Symphony, Virginia Symphony, Milwaukee Symphony, Syracuse Symphony, South Carolina Philharmonic, Mansfield Symphony, Northeastern Pennsylvania Philharmonic, Woodstock Chamber Orchestra, Cayuga Chamber Orchestra, MasterWorks Festival, Sewanee Music Festival, C. W. Post Music Festival and the Skaneateles Festival. During the 2021–22 season, Ms. Burns guest conducted three concerts with the Youngstown Symphony.

Versatile in all genres, she is active on operatic stages as well, having conducted opera at the MasterWorks Festival and having been associate music director of the Bronx Opera Company — conducting opening nights — for nine years. Ms. Burns has performed with two-time Grammy winner Sylvia McNair, and guest conducted two performances of an Elvis Tribute with the Memphis Symphony. Equally fluent in choral and orchestral repertoire, Ms. Burns has conducted major oratorios with prominent Metropolitan Opera soloists such as Ben Heppner, Heidi Grant Murphy, Angela Brown, Mark Delavan, Mark Oswald and others. Committed to the furthering of musical education of all generations, she guest conducted the NAfME All-National Youth Orchestra, is sought-after as an All-State conductor, has guest conducted at CelloSpeak and has twice served as a private coach/specialist on the faculty of Chorus America’s Choral/Orchestral Masterclasses for the orchestral conducting training of choral conductors.

Ms. Burns has received conducting awards from the Aspen Music Festival, studying with Paul Vermel, and the Conductors Guild, where she was unanimously presented with their prestigious biennial prize, the Thelma Robinson Scholarship, while still a student at Mannes College of Music (NY). Ms. Burns also received an Artist Diploma in Yale University’s eminent Conductor Apprentice Program on full scholarship and upon special invitation of Yale faculty. In this capacity, she regularly worked with noted mentor conductors such as Gunther Herbig, Lawrence Leighton Smith and Eleazar de Carvallho. She also participated in master classes under the tutelage of prominent guests such as Kurt Masur, Leopold Hager and Zdenek Macal. Ms. Burns completed her master's degree and Professional Studies in Orchestral Conducting on full scholarship at the Mannes College, where she studied with Yakov Kreizberg and Michael Charry. Previously active as a violinist, she holds both bachelor's and master's degrees in violin performance from Mannes, where she began preliminary conducting studies with Semyon Bychkov. Ms. Burns is an alumna of both the New York String Orchestra Seminar under Alexander Schneider, and The Quartet Program. An avid chamber musician, Ms. Burns was an original member of the former Chester String Quartet.