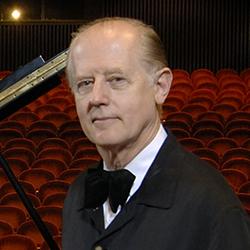 Walter Verdehr, born in Gottschee, Yugoslavia, received his first violin instruction at the Conservatory of Music in Graz, Austria. A student at the Juilliard School, Verdehr was the first violinist to receive a doctorate there, and on a Fulbright Fellowship he studied at the Vienna Academy of Music. He was a member of the International Congress of Strings faculty for several summers and Chairman of the String Department at Michigan State University School of Music where he is professor of music and recently received the Distinguished Faculty Award. In the U.S. and Europe he has given many solo recitals, has appeared as featured soloist with numerous orchestras, and has made solo recordings for Golden Crest Records and Crystal Records. The London Times wrote that his performance was "sweeping and vigorous." The Vienna Express stated "he is a perfect violinist with beautiful blossoming tone and noble musicality." He served as juror at the Prague Spring International Violin Competition (1997) and Naumburg Violin Competition (1998 and 2003). He performs on the ex-Stephens/Verdehr Stradivarius of 1690.

This event is free and open to the public. No ticket required.

A new home for the School of Music
The transformative Ohio State Arts District project includes a renovated and expanded School of Music. This new facility is an investment in our future performers, music educators, conductors and scholars. To learn more, visit go.osu.edu/artsdistrict.